The Allure of Exclusivity 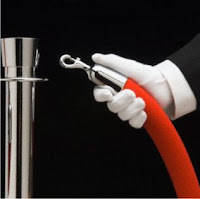 Everyone wants to be on the inside. They want to be part of the inner circle, a member of the in-group. When companies create an environment of exclusivity, they are appealing to this innate desire for inclusion.

It's common practice for new technology companies, whether developing a new social network or a mobile app, to offer a limited number of "beta" invites before providing access to the general public. This does more than supply the company with a test environment for their product; it creates a buzz due to the exclusive nature of these invitations. Pinterest, which recently skyrocketed in popularity to become one of the hottest social networks, started out by requiring users to sign up for a waitlist to join. Similarly, in the early days of Gmail, now probably the most popular web-based email client, you had to be invited to set up an account by someone who already had one. Another example is the music streaming service Spotify which recently took the US by storm, initially launching in this country with a limited number of account invitations. You can even trace Facebook's unprecedented success back to its days as an exclusive, college-only social network requiring a ".edu" email address to join, a differentiating factor that helped propel it past existing competitors like MySpace and Friendster.

Leveraging the allure of exclusivity is a practice that has been utilized by businesses long before these Internet companies entered the fray. Country clubs and other exclusive members-only organizations have been around for ages. Another prime example of this strategy being used effectively is American Express, which has turned its cardholders into a membership "community". They even go a step further by offering different levels of exclusivity; starting with their entry-level Green card, all the way up to the pinnacle of exclusivity, the Centurion Card, or Black Card as it's more commonly called. These examples also add the incentive of special treatment; not only are the customers included in an exclusive group, but they are receiving the VIP treatment as well.

Any type of closed community with even the most superficial barrier to entry, whether its a VIP rewards program or members-only community, helps foster an exclusive atmosphere and appeals to our natural inclination towards being included. How can you make your customers feel as though they are part of an exclusive group?